Spice was just a pup when she came into our lives ten years ago.  She was a ball of energy, always loving (except for that one time with the dog who tried to dominate her) and she lived each day with joy.  I loved getting up every morning at 5:00 to share some time drinking coffee (me, not her) and getting belly rubs (her, not me).

Last Sunday, December 2, Spice died.  She was fine, and then she wasn’t.  The vet is sure it was a brain tumour which caused her to have a massive seizure.  After rushing her to the emergency vet clinic, I was given the terrible news that there was nothing good that could be done and any intervention would only be prolonging her suffering.  So, I chose to say goodbye to my beautiful lab.  She died hearing the words, “Good girl.  We love you” while getting her belly rubbed…her favourite thing.  I have been very sad about losing her, but I have absolute peace knowing I did what I believe was best for her, that I never left her alone and I didn’t let her suffer.

The rest of the week was tough.  It was too quiet at 5:00.  It was too lonely watching the news in the morning, and drinking coffee alone.  Walter, our young basset-beagle hound, had stopped eating, stopped playing, and was truly depressed.

On Tuesday, we received a call from Allison, the leader of a rescue organization (from which we adopted Walter) to ask if we were interested in meeting a new rescue they had.  He is the same breed as Walter and has a lovely temperament.  While I was reluctant, we agreed that a meeting on Saturday couldn’t hurt.  On Saturday we packed up Walter, and headed to Fergus to meet Winston.

Yes, we had already named him and were referring to him as Winston in our emails with Allison. When we met Winston, he was energetic and happy.  He and Walter spent some time getting to know one another.  We decided to bring him home to foster him…but here we are three days into our time with Winston and I sent in the adoption paperwork yesterday.  He has brought a joy back into our home.  He has lifted Walter’s spirits.  He gets up for coffee with me in the morning.  He plays.  He loves the kids.  He is becoming less afraid of the cat.

I will always miss Spice and the special love she gave.  But I know that she would not want us to keep our love away from another dog.  She would want us to share that love with another friend and give him a warm bed, food, couch snuggles, treats and a family to call his own. So…meet Winston… 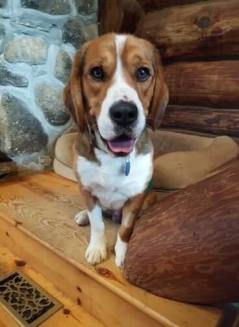